The above video was produced in house against a green screen for manipulation in editing.

With web video exploding and the launch of GoogleTV, it's a wonderful time to be able to upload your own content. But just because anyone can do it doesn't mean everyone should. For every well-produced, entertaining and informative video, there are millions that aren't. So what are some of the bigger pitfalls to avoid if you want your video to get people talking? Here are a few tips to help you make a quality video.

Take the Time to Write

Unfortunately, few people who are rushing to get their stuff up on YouTube have actually thought it through. And you don't have to take my word for it — just click on 99% of the web shows out there and you'll find the script was clearly lower down on the priority list than craft services.

So here's where you'll need to roll up your sleeves. You have to actually sit down and come up with compelling characters and interesting situations. There's no hurry to get it right either, so take your time.

It's probably best to outline your show before you write it. And while you're doing that, discard any parodies you've been thinking about. The web is bursting with them. If you want your content to stand out, you should focus on creating something original.

The wonderful thing about the Internet is that you are your own creative force. Nothing exists to dilute your voice or imagination as it might in more established mediums like TV or film, so use both to their full extent.

The target length for most web videos is five minutes or less. You should be fully aware of this as you write and prepare for production. Know that within those five minutes, there needs to be a beginning, middle and an end — even if it's part of a greater narrative structure that takes place over 10 episodes.

Remember that you must make it as engaging as possible: You're competing with e-mails, Tweets, and whatever else is pinging away in the background.

It's also important to note that most people watch web videos alone. The sharing is often done not with people present, but through social media and e-mail. So think about how habits change between lone and group audiences.

Take comedies, for example. Viewers tend to have more "laugh out loud" moments when they watch with other people. Sometimes that laughter is contagious — other times, a viewer will want his company to know he's smart enough to get the joke. Either way, a lone viewer's laugh out loud moments are going to be fewer and shorter. So when editing your web-based comedy, it's wise not to leave gaping holes after jokes for the laughter you're expecting. All you'll end up with is a vacuum that reminds the viewer that the joke they just heard was even less funny than they thought.

You don't have to compete with Mr. Spielberg, but there are a few basics that should be noted when it comes to producing web video — simple things like getting the lighting right (can we see your actors?), making sure all the dialogue can be heard, and ensuring the room tone matches.

Don't know what room tone is? It's making sure that everything sounds basically the same when you're cutting from shot to shot within one setting. To do that, the editor lays down an audio track taken from the room while shooting, which can then be used to make the ambient audio uniform between takes.

Web audiences don't expect something that looks like The Matrix — but they're not going to put up with dialogue that sounds like it was recorded through a tin can. Find a good middle ground. Once you've got good acting talent and a great script, decent production values are what will set you apart from the thousands of other videos your audience could be watching instead.

So why is nothing happening? Because you're yelling into a chasm that's filled with the echoes from a million other people. No one's listening for the same reasons they never look at the flyers that come in the mail or the marketing pitches that come to their inboxes.

Take a more engaging approach. It's a longer route, but the payout is far greater because you'll ultimately be talking to people who care.

If you're producing a comedy series, don't use the related Twitter account to only broadcast when new episodes are up. Between videos, use it as an outlet for news jokes or a free source of silly gags.

And if you are trying to share your content with specific people, take care to avoid hitting them with the same message from multiple angles. The more e-mails, Facebook messages, and Tweets one gets about the same thing, the less likely she'll be to naturally discover and enjoy it. 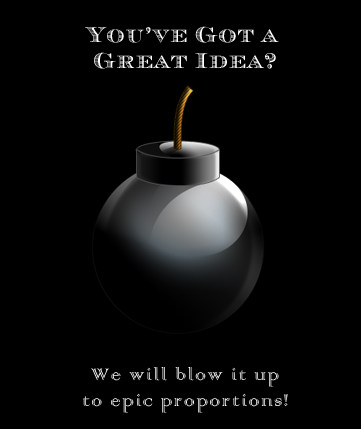